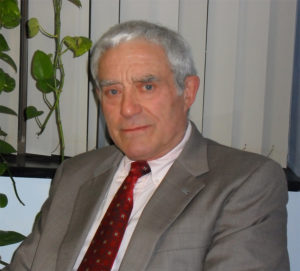 Like many of the patients here at NIHS, my staff and I feel enormous gratitude for the late Dr. Kenneth Blanchard, a true pioneer in endocrinology, specifically in the detection and treatment of hypothyroidism.

Dr. Blanchard recognized that many of his patients showed symptoms consistent with hypothyroidism -- reduced energy, unexplained weight gain, hair loss, depression, sleep disturbance -- even though standard TSH blood tests were normal. He called the failure of mainstream endocrinology to accept and treat these patients' hypothyroidism "the single greatest mistake in the history of medicine."

He also understood that while some of these patients with "hidden" hypothyroidism respond well to T4 -- which the body typically converts into the active hormone T3 -- others do not convert T4 to T3 normally and require a mix of the two to feel better. Dr. Blanchard further recognized links between hypothyroidism and a range of ailments including migraines, PMS, fibromyalgia, IBS, and chronic fatigue syndrome -- and successfully alleviated symptoms for hundreds of patients suffering from these.

Finally, he appreciated the limitations of the standard medications given to patients who do not effectively convert T4 to T3, rendering these treatments ineffective in the long-run for many. Working with experts in compounded pharmaceuticals, Dr. Blanchard developed a set of detailed protocols to customize prescriptions for each patient based on how they reacted to incremental changes in their medication. His work brought substantial relief to more than 1,000 grateful patients over the course of his career, many of whom report, "He gave me my life back."

Dr. Blanchard's work remains controversial among endocrinologists, as it is antithetical to what they were taught in medical school. Many dismiss it outright, despite his clinical results.

When Ken Blanchard passed away suddenly in April 2017, I had been training with him for 16 months. Just six weeks earlier, he had invited me to join his practice and to begin seeing his patients on my own a few days a week, with plans to increase that over the next few years as he reduced his hours in the office. I had hoped to continue working alongside him for years to come, and was devastated by his passing.

Today, I am honored to carry forward with Dr. Blanchard's patients and those like them who have not found relief from their hypothyroidism through traditional treatment. I dedicate my work with these patients to Dr. Blanchard, and the courage, wisdom, and caring that he had on their behalf.

I also encourage each of my new patients to read Dr. Blanchard's book, The Functional Approach to Hypothyroidism. It will make you a more informed partner in the care you receive here at Newton Integrative Health Services. You may also wish to read What Your Doctor May Not Tell You About Hypothyroidism, Dr. Blanchard’s first book.